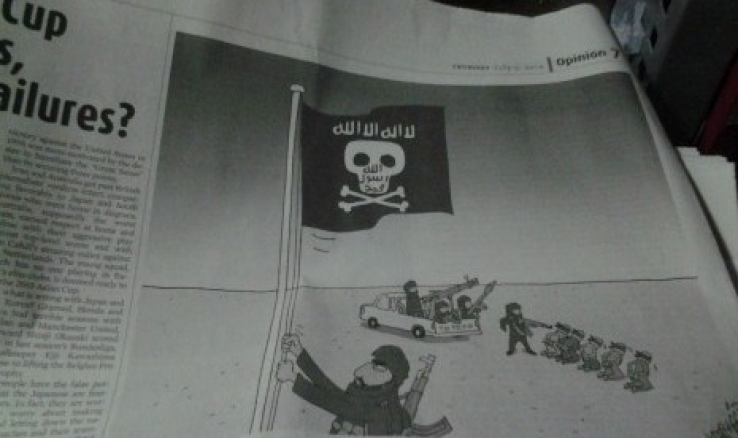 "The caricature published by The Jakarta Post on July 3, 2014, has hurt the feelings of Muslims. It is a very despicable humiliation against Islam. In Gods name, I condemn it," AA wrote on his Twitter account.

He said that The Jakarta Post must be asked to take responsibility for the humiliation against Allah and His Prophet.

Although he felt offended, AA called on the Indonesian Muslims to not let themselves be provoked. They should better report the case to police and assure no such actions are repeated.

"Although I am angry, we should not resort to anarchic acts. It will be better for us to report the case to police and make sure that such actions do not happen again," he said.

Earlier, the Indonesian people were shocked by the publication by The Jakarta Post of a cartoon on July 3, 2014, which was considered insulting to Muslims.

In the meantime, chairman of Muhammadiyahs youth wing organization, Saleh Partaonan Daulay, has condemned The Jakarta Posts editorial cartoon, which has maligned Islam, categorically stating that the newspaper editors apology has failed to pacify the hurt sentiments of Indonesian Muslims.

"The apology has not been able to appease the humiliation and hurt. This malicious cartoon has probably been published with (inappropriate) intention. Moreover, it has been disseminated to the world," Saleh stated here on Tuesday in response to the publication.

By publishing the cartoon, The Jakarta Post has achieved its goals. So, the newspaper editors apology and retraction of the malicious cartoon is "useless," Saleh pointed out.

The controversial editorial cartoon was printed by The Jakarta Post on page seven in its July 3, 2014, edition.

The cartoon depicts a pirate flag in black being hoisted by an armed man with the words "la ilaha illallah," which is an Islamic creed declaring belief in the oneness of God, and a human skull bearing the words of Allah, Rasul, Muhammad.

According to Saleh, the publication of this unacceptable cartoon was inappropriate and should not have happened in a Muslim-majority country.

"This is awkward. In a country where a majority of the population had embraced Islam, it has been maligned," Saleh emphasized.

In connection with this controversial cartoon, The Jakarta Post editor had published an apology and retraction in the daily newspapers July 8 edition, saying that it had regretted "the error of judgment, which was in no way meant to malign or be disrespectful of any religion."(*)

JComments
back to top